Download Proximate now and let the hottest deals from your favorite retailers find you! 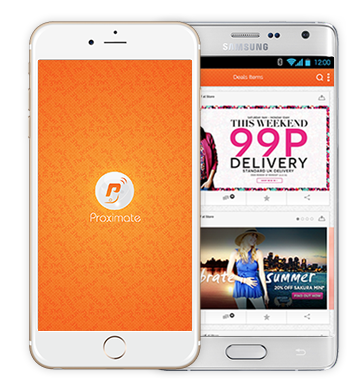 FAQs
1. What is a Beacon?
Beacons are low-cost, low-powered transmitters equipped with Bluetooth Low Energy or BLE (also called Bluetooth 4.0 or Bluetooth Smart) that can be used to deliver proximity-based, context-aware messages. A beacon transmits signals which allows another device to determine its proximity to the broadcaster. In a store, a beacon lets a customer’s app determine that it’s close to a particular aisle, or in a particular department. The beacon doesn’t transmit content, it simply transmits a signal that lets a user’s phone or tablet figure out what its proximity is to the beacon.
2. What is a beacon environment?

A beacon environment is a place where beacon technology is used to interact with the smart devices of users. For example, in a shopping mall to tell shoppers about different promotions. Beacons are strategically place in such an environment to send useful information to the user. The user has to be in the range of the beacon to be able to receive such communications.

Bluetooth Low Energy (also called Bluetooth 4.0 or Bluetooth Smart) is the specification for the type of signals that beacons transmit. Bluetooth LE has the advantage that it is low energy and is ‘native’ to most modern phones and tablets.

4. Will I need to pair with beacons like existing Bluetooth?

No. Bluetooth 4.0 which is used to communicate with beacons no longer requires you to perform pairing like you may be used to with existing headsets, sound systems etc… so no more waiting for ‘searching for devices’ and having to enter passwords, Bluetooth 4.0 enables a much more seamless connection.

5. Will this drain my phones battery life?

Current technology has improved Bluetooth, and it is not the battery drainer it used to be. This is why the new technology is branded with BLE = Bluetooth Low Energy.

6. How are beacons different from GPS? Are beacons better than GPS for geo-location?

In terms of range, beacons function in the interim of NFC (too narrow) and GPS (too broad) ranges, and that is what makes it more effective than the other two. They are ideal for detecting smartphones indoors, where GPS isn’t always effective, and can communicate with apps on devices when they are indoors.

7. How are beacons different from NFC?

NFC range is up to 20 cm but the optimal range is < 4 cm . With BLE technology, beacons have a significantly larger range, of approximately 70 m.

8. Do beacons work only with iPhones or with Android phones too? For beacons to work, should the app be always running,
even if only in the background?

Beacons work with both iPhones and Android phones, but they work differently.With the launch of iOS 7.1 in March this year (iOS 7.1 launch) Apple announced a game-changing improvement to iBeacon. This is that, once an app is installed it will “look” for beacons even if an app is shut down or a user has rebooted his/her phone. Thus, iOS 7 devices can now constantly scan for BLE and wake up relevant apps, even if they are closed, when they come within range of a beacon. Android devices, however, do not have a beacon system of this type at the operating-system level. Currently, the only way to wake up in response to a beacon in Android is to run a service in the background that continuously listens. Hence, Android apps need to scan for BLE, and so there is more of a battery drain for Android users when beacons scan for apps.

9. How precise is beacon-detection indoors?

Though it depends on the intended use and immediate surroundings too, generally one could detect the presence of beacons as far away as 50-70 meters or as little as 10 inches, so it is very accurate.

10. Which devices are compatible with beacons?

All Bluetooth 4.0-enabled devices are capable of picking up BLE signals, these include all iOS devices manufactured since 2013.

11. Will the beacon send data to my phone?

12. Will the beacon send in-store offers based on my location?

This is a very common misconception about beacons. Beacons do not send notifications to a user’s phone; apps do. Beacons simply send a unique identifier to an app (akin to a geographic landmark), to tell the app that it is entering the beacon range. That signal makes an app aware that it’s time to send the user a notification, trigger messages or perform an action. Beacons don’t transmit content – they transmit a location, enabling apps to retrieve and surface location-relevant content.

13. How can I turn off notifications?

If a user does not want to interact with beacons, he/she can opt-out by not allowing the app to use location services (iOS), turning Bluetooth off, or uninstalling the app on their phone. User can also turn off notifications by setting preferences.

14. Will beacons capture my personal information?

No. Again, beacons are transmitters only, they will not collect information. They store only a small set of data for self-identification purposes. There is no large capacity storage facilities on beacons.

Proximate is Mobile Marketing Platform and Location Aware App with Beacon Technology Proximate Platform for proximity marketing, provides opportunity and ability to merchants to inform, greet, engage and delight their customer at places around them. It’s a one-stop, fully integrated, affordable solution that enables you to get ahead of the competition and own the one-to-one customer relationship.